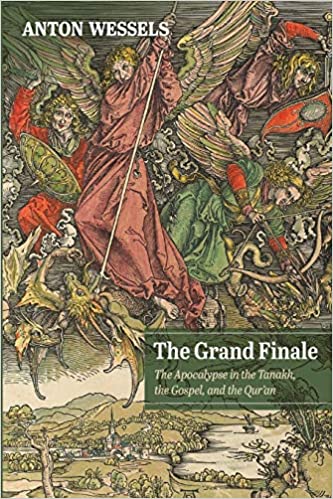 Anton Wessels: The Grand Final – The Apocalypse in the Tanakh, the Gospel, and the Qur’an, Eugene (Oregon): Wipf&Stock, 2020

„We often hear that we are living in apocalyptic times. Wars like those in the Middle East are just more signs that the end is near. That, however, is a misunderstanding of the message of the Bible and the Qur’an. The basic meaning of “apocalypse” is disclosure, revelation, bringing to light what is happening now and what has happened throughout all of history.
The “apocalypse” is not about making predictions about the future but about determining who bears responsibility for injustice in the world. In that sense, all times—including ours—are “apocalyptic,” though in a different way than what is usually thought.
Since the devastating Greek conquest of the world by Alexander the Great, there have been apocalyptic insights and “revelatory” readings of the whole Hebrew Bible. The same is true of the New Testament with “Rome” as the world power then. The same apocalyptic message is confirmed by the Qur’an when the Byzantines and the Persians fought for mastery of the world.
The apocalyptic message is that God will put an end to the unjust dominion of violence, money, and lies.
God’s kingdom will certainly arrive, but not through violence—after all, there “is no violence in God” (Diognetus).“

„An excellent discussion of apocalypse in Jewish, Christian, and Muslim Scriptures. Wessels sees a single apocalyptic narrative in them–not as predictions or signs of end-times, but as the quest for justice. This apocalypse prophetically reveals injustices and proclaims their end. The old order is dying and the new order is but a vision. This is a radical approach towards apocalypse, challenging the status quo ante and imagining a new world order of justice and righteousness.“

Anton Wessels is emeritus professor of religion, Vrije Universiteit Amsterdam. His most recent works include Muslims and the West: Can They Be integrated? (2006), The Tanakh, the Gospel, and the Qur’an: Three Books, Two Cities, One Tale (2013), and A Stranger Is Calling: Jews, Christians, and Muslims as Fellow Travellers (2017).